The U.S. Military is the largest organization present in State of Decay, and among the only notable law enforcement agencies still active and operational throughout the outbreak, albeit relatively unseen. They later evacuate following the Black Fever pollution of Trumbull's water supply and Danforth subsequently being overrun by those infected with the disease.

The Army had not attempted any evacuations for the civilian population nor had it attempted to provide relief to any survivors. They had also blockaded the two bridges leading outside the town of Marshall and shot anyone attempting to cross.

They broadcast on the radio not to bury the bodies of the 'reanimated' but to place them in body bags on the street for them to collect, and presumably either research and/or destroy and incinerate the bodies.

In the North-West part of the town is the Carnival grounds which was being used as a Command Center/Foward Operating Base (F.O.B) for operations throughout the entire county until the Black Fever outbreak began. In turn, all forces present retreated from the F.O.B leaving a number of weapons, a wrecked Apache gunship, and any personal sick with Black Fever. When Sgt. Erik Tan attempts to contact Charlie-6 and gets no response, he blows both gates blocking the bridge leading to Fairfield. The player and Tan reach the grounds where they learn that they have been left behind. Sgt.Tan and two other soldiers take refuge within the fairgrounds and create an Enclave known as "The Army".

It is hinted that the military may have executed some squatters or scavengers. Sgt. Erik Tan is quoted saying he has orders to 'Evict any squatters, with lethal force if they resist'.

If you choose to assist Sgt. Erik Tan with rescuing a group of survivors then you will gain the ability to call in artillery strikes at the cost of 50 influence presuming you previously completed the Eyes in the Sky missions.

According to local radio sources, the Military in Danforth had almost entirely pulled out, aside from a small "platoon" commanded by Major Alicia Hawkes. Under the callsign Greyhound, they received orders from Colonel Peel, callsign: Doghouse Actual. Greyhound One relinked with Greyhound Two and retook the LZ outside of Danforth, establishing a F.O.B. and changed their callsign to Black Friday. When Colonel Peel went dark they managed to establish contact via SAT-COMM to Highroad Actual their regimental Headquarters, which granted them the ability to call for long-range airdrops and continue to evacuate survivors.

Black Friday's orders from Doghouse and then later Highroad Actual were to exfiltrate High-Value Targets, such as Doctor Horn, and potentially other survivors when local DJ Vienna Cho, The Last Voice Of Danforth, began broadcasting distress messages from her radio station. After helping Sasquatch recover organs and tissue samples from destroyed Special Zombies, they were ordered to pull out and presumably return to High Command. Depending on how long they stayed, and if the nuclear warhead was detonated or disarmed, they managed to save quite a few assets whilst in the city and evacuate from Danforth.

It appears the military attempted to quarantine parts of the city with a mish-mash of green metal cargo containers, high concrete barriers, watchtowers, razor-wired fence, and sandbags located around the center inaccessible region of Danforth. By the start of Lifeline containment has failed as the fortifications are abandoned, overrun, and located inside the Danger Zones.

The Army set up a refugee center in a commercial shopping center sometime after the outbreak, calling it Camp Osprey. The camp was home to dozens, possibly hundreds of displaced survivors, and was maintained by the military as well as members of Red Talon. Strict rules and regulations were enforced within the camp. The military also set up a medical lab in a nearby Swine & Bovine Restaurant in order to treat infected patients and research a new threat known as the blood plague.

A year into the apocalypse, the Army decided to abandon the camp for undetermined reasons. They seized what was left of the camp's food, as well as the medical lab's equipment, and fled. The remaining survivors either ran or were killed when the perimeter was breached, allowing zombies to overrun the camp. After the outbreak, the camp is found picked clean and deserted, save for a lone soldier and doctor.

The extent of military operations in Cascade Hills is unknown. However, the presence of Army Zombies, military outposts, and roadblocks suggests that they attempted to contain the outbreak in the foothills, with little to no success.

Several military buildings, including roadblocks and evacuation centers, are scattered across Drucker County, suggesting yet another failed military operation. The evacuation center near the Wheelhouse Truck Stop will unlock the ability to call in Artillery Strikes if claimed as an outpost.

To the south is the county airport which has been fortified with fencing and an outpost. With a clear runway and intact Air Control Tower, it was likely used as a camp for the government to; transport troops, supplies, and evacuate refugees. It is possible that when the walls were breached they extracted with the air vehicles on site.

The military presence in Meagher Valley is rather light, with only a few outposts located throughout the valley.

Other known locations and MembersEdit

First meeting with the Army in Trumbull

The Army enclave in Trumbull 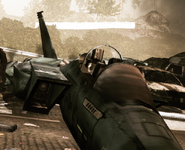 A US Drone Satelite Station

The military has dug in

Sniper station set up near the docks of Danforth
Add a photo to this gallery
Retrieved from "https://stateofdecay.fandom.com/wiki/U.S._Military?oldid=50731"
Community content is available under CC-BY-SA unless otherwise noted.